Cyclones, Hurricanes and Typhoons are the same phenomena

A cyclone is a very strong depression that begins over the warm waters of the oceans of the intertropical zone and is accompanied by very violent winds and torrential rains. These depressions are called cyclones or hurricane in the Caribbean Sea and the Gulf of Mexico, and typhoons in the western Pacific.


Their places of birth: Most cyclones originate in the equatorial calm zone, a narrow equatorial belt characterized by weak winds alternating with frequent grains, and located between the northeast and southeast winds. Since the calm zones of the Atlantic are located very north of the equator, the cyclones do not appear in the South Atlantic Ocean. The calm zones of the Pacific extend north and south of the equator; hurricanes also form in the south and in the northern Pacific Ocean.

Characteristics: Cyclones are characterized by very strong winds blowing circularly around a center of low pressures called eye. The low pressure center develops when dense, cold, extra-tropical air interacts with the warm, saturated air of the intertropical zone, causing it to rise in altitude. From the edges of the depression to its center, the atmospheric pressure drops sharply and the wind speed increases. The winds reach a maximum force when they are close to the minimum pressure point. The diameter of the area affected by winds with a destructive force that may exceed 150 miles. In an area of 310 miles in diameter, gusts of wind dominate.

Trajectories of cyclones: Cyclones generally move along a trajectory that resembles the curve of a parabola. In the northern hemisphere, they first move north-westerly, then, at high latitudes, they move north-east. In the southern hemisphere, the usual hurricane route is initially oriented south-westerly, then southeasterly. Cyclones move at variable speeds. At low latitudes, their speed of travel ranges from 6 to 18 mph and in high latitudes it can reach 50 mph. Areas where winds blow in the same direction as the general storm trajectory suffer the maximum of the destructive violence of the cyclone.


Oversight: Radar, sea-based recorders, and geostationary meteorological satellites (since 1966) now provide data to minimize the human casualties caused by cyclones, but material damage remains severe, particularly in coastal areas. Cyclone Gilbert, the most violent that hit the American continent in the 20th century, devastated Jamaica and part of Mexico in 1988, with winds reaching 220 mph. 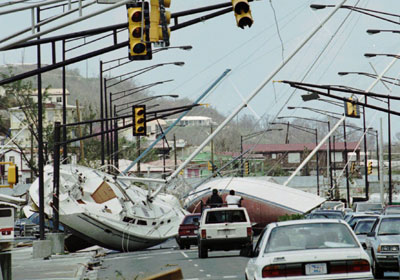 The destructive power of cyclones: The devastating power of a cyclone is exerted in three domains: wind, rain, sea. Each hurricane is unique and has different effects depending on the combined importance of these three elements.

Cyclones accompanied by heavy rainfall cause a lot of damage in mountainous and flood-prone areas. Sudden floods, landslides, mudslides and floods. The rainfall records are often recorded in Reunion due to its significant relief (1144 mm of water in the 12 hours cyclone Denise 1966).
Cyclones accompanied by very violent winds cause considerable damage to houses and infrastructures throughout the country (190 Mph, Typhoon Tip, Pacific 1979). Roofs, electrical network and telephones destroyed. They also induce very strong swell which can cause considerable damage to the coastline, ports and marinas.

The last element called « storm surge » consists of a sea-level swell under the hurricane zone, which is generated by the very low pressure at the center of the phenomenon associated with a particular relief of the seabed (plateau continental). For this reason, the tides of storms are of smaller amplitude in the zone of the Antilles than in the Indian or pacific ocean. (1 yard for Luis in 1995 against 14 yards in Australia in 1899).

The classification of hurricanes

Strength:The strength of the cyclones is graded on a scale from 1 to 5. The lowest, category 1, has winds of at least 174 Mph. The strongest (and the rarest), category 5, has winds of more than 155 Mph. Inside the storm eye, which measures an average of 15 miles in diameter, the winds fall and the clouds dissipate, but the sea remains very restless.

(*) The storm surge is the height that the ocean reaches on the shore above the normal high tide for the date.
As the Saffir-Simpson scale uses one-foot scales, metric conversions are not continuous.

Icon displayed in our multiples destinations where the cyclonic risks are proven.

Definition of categories on the Saffir-Simpson scale

Category 1: Damage especially to shrubs, trees, foliage and residences without foundations. No real damage to other structures. Damage to weak signboards. Flooding of low-lying coastal roads; minor damage to wharves; some small boats anchored in exposed areas are torn off their moorings.

Category 3: Foliage ripped from the trees; tall fallen trees. Almost all unscrupulous signboards are torn off. Damage to building roofing materials, windows and doors. Damage to the framework of small buildings. Destroyed mobile homes. Severe flooding on the coast and destruction of many smaller structures near the coast; the larger structures near the coast are damaged by waves and floating debris. The small evacuation routes inland are flooded three to five hours before the arrival of the center of the hurricane. On a five feet height (1.50 m) or less above sea level is flooded over a distance of eight miles (12.8 km) or more inland. Residences on low lands may have to be evacuated on several streets.

Category 4: Shrubs and fallen trees; all the signboards broken. Significant damage to roofing materials, windows and doors. Roof failure of many small residences. Complete destruction of mobile homes. On a 10 feet hight (3.04 m) or less above sea level is flooded up to six miles (10 km) inland. Significant damage to the lower floors of structures near the shore due to flooding, waves and floating debris. The small evacuation routes inland are flooded three to five hours before the arrival of the center of the hurricane. Great erosion of beaches. All residences within 500 yards (450 meters) of the shoreline, as well as single-storey residences within two miles (3 km) of the shoreline, should eventually be evacuated.

Category 5: Shrubs and fallen trees; extensive damage to the roof of buildings; all the signboards dropped. Very important damage to windows and doors. Roof failure in many residences and industrial buildings. Windows and doors completely broken. Complete breaking of some buildings. Small constructions returned or taken away. Complete destruction of mobile homes. Significant damage on the first floor of all structures within 15 feet (4.56m) above sea level within 500 yards (457m) of the shoreline. The small evacuation routes inland are flooded three to five hours before the arrival of the center of the hurricane. Residential areas located on low land at a distance of 5 to 10 miles (8 to 16 km) from the shore should eventually be evacuated.

In order to show that the cyclone periods are predictable, we have prepared a speaking history, covering the main tourist areas worldwide. So are you counting on the chance to avoid a severe category 5 cyclone or will you follow our advice?